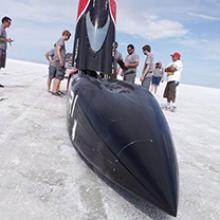 Congratulations go out today to Ohio State’s Venturi Buckeye Bullet team, which today announced that it has successfully nailed down yet another international land speed record.

Last week at the Bonneville Salt Flats near Wendover, Utah, professional driver Roger Schroer guided the VBB-3 to an average two-way speed of 212.615 miles per hour, according to a press release. The new record is pending certification by the Federation Internationale de l’Automobile (FIA), the worldwide motorsports governing body. The VBB-3 set the mark in Category A Group VIII Class 8, a new competition category for vehicles weighing from 3,501 to 4,000 kilograms (approximately 7,717 to 8,818 pounds).

The streamlined, electric racecar was designed and assembled by undergraduate and graduate students at the Center for Automotive Research at The Ohio State University (OSU CAR). After setting numerous land speed records with previous vehicles, the team recently built a new streamliner with the latest electric drive technology from program partner Venturi Automotive, an electric car company based in Monaco, and lithium ion batteries from A123 Systems, a battery research and manufacturing firm based in the U.S.

Several OSU CAR student engineers over the years, including graduate student Casie Clark on the latest iteration of the Bullet, have leveraged the resources of the Ohio Supercomputer Center to evaluate and refine the racecar’s aerodynamic properties. They looked at issues, such as optimizing the body shape to achieve minimum drag, packaging constraints and vehicle stability considerations.

“At these high speeds, aerodynamics play a crucial role in vehicle and driver safety, as well as being one of the critical factors that dictate the peak performance of the vehicle,” said Dr. Giorgio Rizzoni, director of OSU CAR, in OSC’s 2013 research report. “From the start of the design process, the aerodynamics of each proposed body shape for the VBB3 was evaluated in Fluent and OpenFOAM using the computational resources available at the Ohio Supercomputer Center.”

For example, to ensure the desired yaw stability at high speed, extensive simulations were run to evaluate the effectiveness of the vertical tail, which underwent several design iterations. Then, several new runs and studies were launched to evaluate the overall aerodynamic performance of the vehicle, with some solutions involving more than 42 million cells. 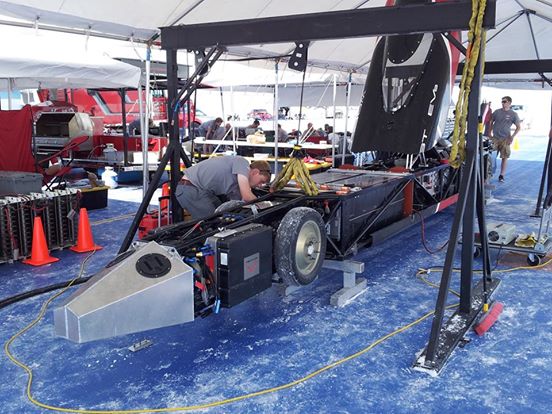 “Since it’s a new car with a new body, it has been interesting to look at the current aero, and to identify areas of improvement,” said Clark in the report. “For example, I ran CFD jobs aimed at designing a wind deflector to deflect air around the tires, instead of allowing a large air mass inside the wheel wells, which creates substantial drag.”

Kudos go out to the VBB-3 team not only for its impressive automotive design, manufacturing and racing skills, but also for its dogged persistence. Heavy rains last year washed out Bonneville competitions last year, and the rains returned again this year to force cancellation of the SpeedWeek competition slated for August. Last year, the crew secured some time on a runway at a nearby airport to give the car some shorter test runs, and this year they were able to stick around for a somewhat drier surface during a private racing event being held on the Bonneville course. Their determination to not let poor weather stymie their efforts paid off with another world record.