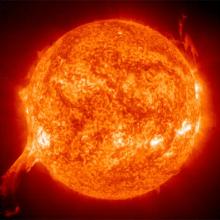 Ed.–Astronomy Day, observed this year on both May 10 (spring) and on Oct. 4 (autumn), is a grass roots movement sponsored by the Astronomical League designed to share the joy of astronomy with the general population. Local astronomical societies, planetariums, museums, and observatories will be sponsoring public viewing sessions, presentations, workshops, and other activities to increase public awareness about astronomy and our wonderful universe. To recognize Astronomy Day on the OH-TECH Blog, we invited Drs. Sultana Nahar and Anil Pradhan of The Ohio State University to share a little about one of their most recent research projects.

Astronomical objects in the space beyond the earth are fascinating and 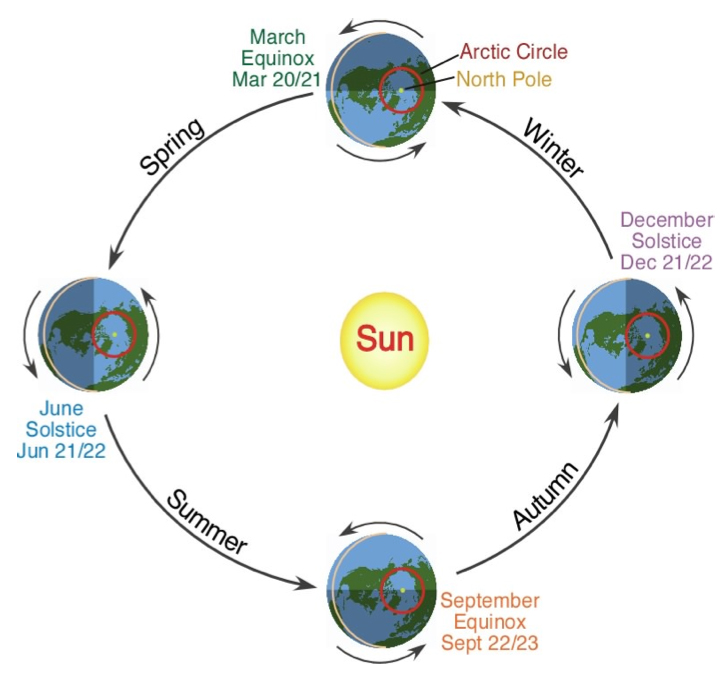 enigmatic. We belong to the planetary system of our home star, the Sun (above), which is our source of energy on Earth. The Sun is a gigantic ball of hot plasma, the fourth and most prevalent state of matter (over 99% of matter in the universe is plasma, not solid, liquid or gas). It is very important to know how the Sun generates its energy, how that propagates as radiation, what are the solar constituents and elemental abundances, and what are the plasma conditions throughout the Sun. The sun is the “standard” for studying not only stars but also most classes of astrophysical sources. It is a typical low-mass star burning hydrogen fuel and will eventually evolve into a compact “white dwarf,” similar to 98% of all stars. [An interesting aside: A white dwarf is mainly composed of carbon and may eventually cool and turn into a gigantic diamond under continuing gravitational compression!] Although we know a lot about the sun, we still lack much crucial information, such as the dynamics of solar eruptions that affect even the terrestrial atmosphere. Uncovering that information requires intensive study of atomic and astrophysical processes through large-scale, high-precision computations using supercomputers, such as those at the Ohio Supercomputer Center (OSC).

Unlike its appearance from afar, the Sun is anything but quiescent (Figure 1). Due to its varying plasma state of charged particles, the Sun has a magnetic field with north and south polarities. About every 11 years, the poles change direction when the Sun becomes very active. Strong magnetic fields, particularly manifest around sunspots, cause solar storms and flares, i.e., violent eruptions and ejections of copious amounts of high-energy radiation, from UV to X-ray, as well as winds of charged particles, electrons and ions, that fill the interplanetary space way beyond the Earth and up to the end of 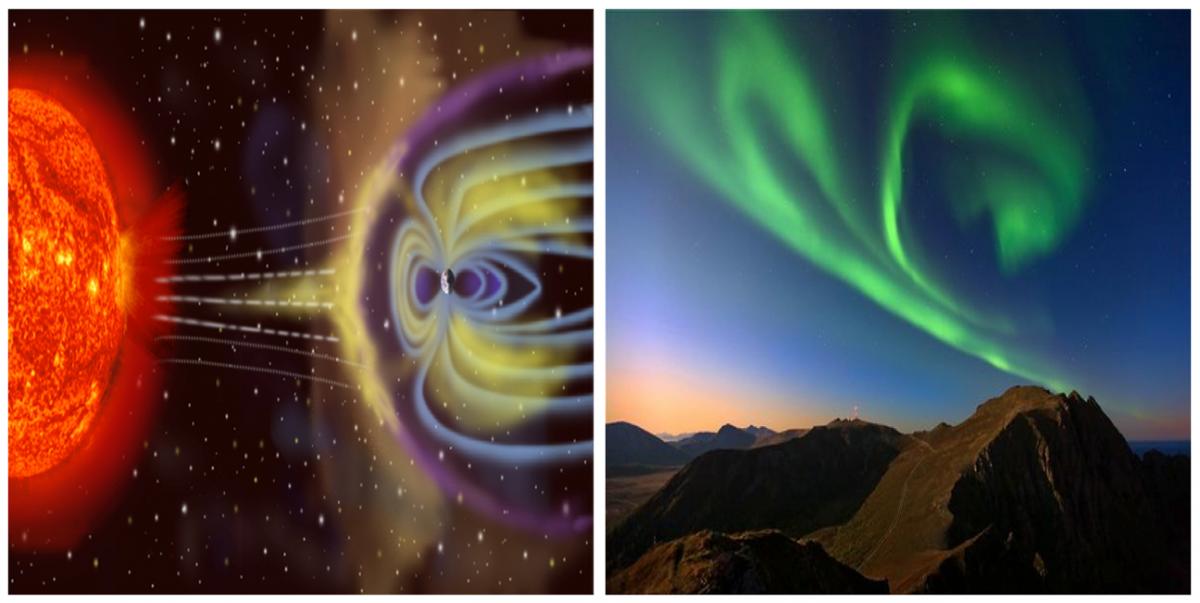 the heliosphere – space surrounding the Sun under its gravitational and physical influence – out to about 50,000 times the Earth-Sun distance (Figure 2). Although this high-energy radiation+particle combination can be harmful to life on Earth, the earth’s atmosphere fortunately deflects and/or blocks most of it. To wit: the ozone layer blocks the UV, and the earth’s magnetosphere captures charged particles in Van Allen radiation belts surrounding the earth, while some activity manifests itself as aurorae near polar regions (Figure 3). Atomic physics reveals these phenomena: we can identify and model X-rays during solar flares in the form of di-electronic satellite (DES) spectra through theoretical calculations (http://www.astronomy.ohio-state.edu/ nahar/publications.html or 1. S.N. Nahar, A.K. Pradhan, Phys. Rev. A 73, 062718-1 (2006) 2. S.N. Nahar, J. Oelgoetz, A.K. Pradhan, Phys. Scrp. 79, 055301 (2009) 3. J. Oelgoetz, C.J. Fontes, H.L. Zhang, S.N. Nahar, A.K. Pradhan, Mon. Not. Roy. Astro. Soc. 394, 742-750 (2009)).

While we can not study all the myriad details of astronomical activity in the laboratory, we can analyze the radiation emanating from the source through ground and space-based telescopes (Figure 4), such as the Large Binocular Telescope, built over the past 25 years with the OSU Astronomy department as a partner, and space-based solar observatories, such as Solar & Heliospheric Observatory, or SOHO, a collaborative project of NASA and the European Space Agency. Analysis of radiation at high resolution in wavelength, or spectroscopy, reveals spectral lines from atoms and molecules that depend on physical conditions in the astronomical source. Also, lower resolution analysis, or photometry or imaging in “colors,” yields information on global properties of astronomical sources, such as masses, ages and evolution. Astrophysical spectra are produced by “hot” atoms or molecules in excited states after absorption of energy by photons, or from a colliding charged particle, such as an electron. 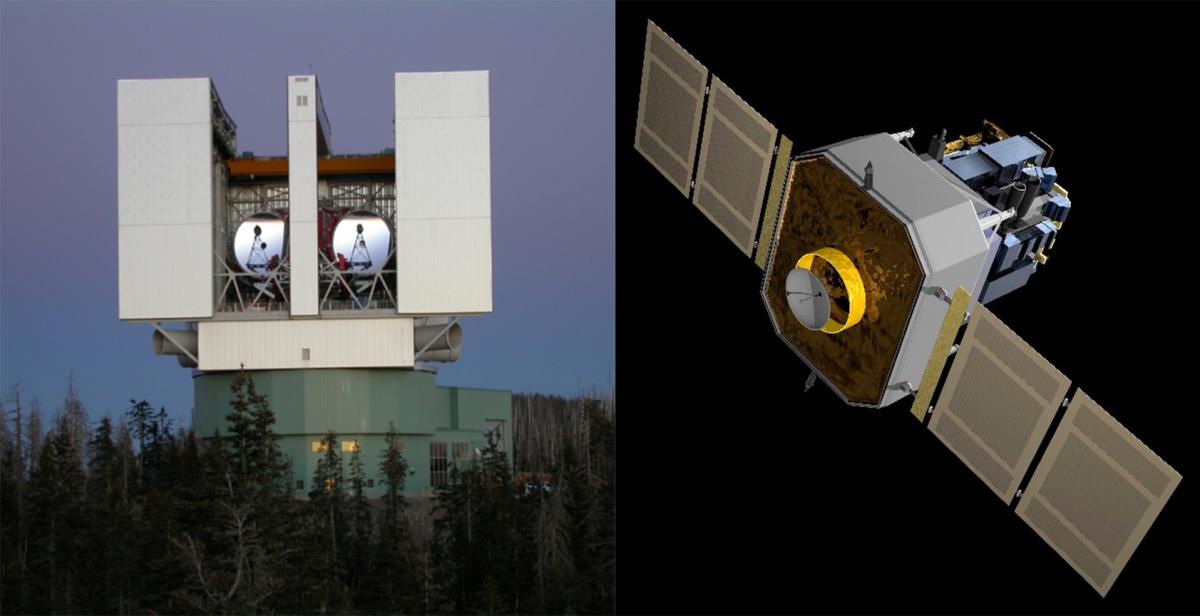 Given its enormous importance we would expect to know the solar composition precisely. But one of the great conundrums in astronomy is that the abundance of common elements, such as carbon, nitrogen and oxygen, are uncertain by up to 50%. In the Sun, the plasma density varies greatly from the core to the surface. Due to strong gravity at the core, the plasma is extremely dense, about 100g/cc (denser than any solid we know!), and superhot, about 15 million degrees. These conditions are necessary for nuclear fusion of hydrogen atoms to create helium. Solar abundances by number are: H ~90%, He ~7% and all other elements (from lithium to uranium) only ∼2%. Iron plays an important role among astrophysical elements. Iron is almost as abundant as C, N and O, and is the end product of evolutionary stellar nucleosynthesis. Elements heavier than iron require energy rather than yield energy during nuclear fusion, and are predominantly produced in violent stellar explosions known as supernovae. Recent determination of solar abundances, from spectroscopic measurements and elaborate 3-dimensional hydrodynamic and non-Local Thermodynamic Equilibrium (NLTE) models, show 40-50% lower abundances of C, N, O and Ne than the heretofore “standard” solar values. However, the new abundances are in conflict with stellar interior models, as well as with accurate measurements of the oscillation modes of the Sun, studied in a branch of astronomy called helioseismology. The resolution of this conflict may be to re-compute radiation flow through the star, governed by a quantity known as the opacity, which depends on atomic absorption and scattering of photons. Since iron is the crucial source of opacity, we have initiated a new project known as the Iron Opacity Project.

As the radiation propagates out toward the surface, it is absorbed and emitted by constituent elements in the solar plasma, before escaping the sun. The repetition of these processes slows down a photon, created at the core, such that it takes more than a million years to reach the surface. This phenomenon is described by the opacity of the medium. Opacity is a fundamental quantity for radiation transport in plasmas. Figure 5 shows the relation of opacity, described in terms of the optical depth (τ) = κ(ν)x, where κ(ν) is the monochromatic opacity, ν is the photon frequency (related to energy), and x is the geometrical depth. The microscopic opacity (κ) depends on two main atomic processes by

absorption of a photon: i) photo-excitation and ii) photoionization, and on the abundances of all constituent elements interacting with photons of all energies. Hence, the opacity is related to the abundances in the medium. For instance, it is found that a 1% change in opacity leads to observable changes in the base of the convection zone (BCZ), the boundary between the radiative and convection zones. Stellar models generally require a mean rather than monochromatic opacity, known as the Rosseland Mean Opacity, dependent on κ(ν) and on the temperature and density at any point inside the star. Determination of the accurate opacities involves a huge amount of high-precision atomic data for all atomic species in all possible excited states and ionization stages of all elements in the plasma. A pioneering effort, known as “The Opacity Project” (Seaton, J. Phys. B 1987; 20:6363), involved about 25-30 scientists from the UK, USA, Germany, France and Venezuela under the leadership of the late Professor Michael J. Seaton of the University College London. Nearly a quarter of a century’s worth of effort (1983-2007) resulted in two databases, TOPbase at CDS in France and OPserver at OSC. New results solved many outstanding astrophysical problems, such as the periodic variation in brightness (luminosity) of a class of massive stars known as Cepheid variables, which are used to calibrate the distance-scale of the Universe. However, recent observations require higher accuracy opacities in order to solve the aforementioned solar abundances problem.

Another recent development in science is to create star-like conditions in the laboratory at certain temperatures and densities found inside the Sun. Fusion energy generated in the core propagates through the radiative zone and, closer to the surface, results in a convection zone of bubbling plasma (Figure 5). The BCZ is a quantity precisely determined via heliose

ismology to be 0.713, as measured from the core on a scale of one solar radius. But the new solar abundances lead to significant theoretical deviation, altering interior models of the Sun. To address this problem, plasma physicists have created high-energy-density (HED) conditions at the BCZ, with temperatures of ~2 million degrees, and density ~1023 particles per cubic centimeter. Under these conditions, the plasma exhibits spectral features of a number of highly charged iron ions, from Fe XVII to XIX; that is, where 16 to 18 electrons have been stripped off respectively. These experiments (Figure 6) are being conducted at one of the largest nuclear fusion devices, known as the Z-pinch (or simply Z), located at the Sandia National Laboratory and operated by a team led by Jim Bailey, a collaborator with the OSU team on the Iron Opacity Project. In a single shot at the Z, 27million amperes of electric current (more current than used in all of the U.S. in one second!) passes through a thin gold cylinder (called the Hohlraum), which thereupon explodes into a high-temperature plasma but remains confined along the direction of the current by its own intrinsic magnetic field. The Z-plasma reaches temperature-density conditions inside the Sun at the BCZ. The high-energy X-rays thereby generated are passed through an iron filament to measure the opacity under BCZ conditions. However, and again highly surprising, the experimental opacities do not agree with theoretical models of opacities, casting doubt on the accuracy of stellar models.

The work of the OSU team involves large-scale computations using the R-matrix packages of codes installed at OSC since 1989. We have found that the precision of opacities depends on the inclusion “resonances” in photoionization,

heretofore largely neglected from earlier calculations (Figure 7). A resonance at a definite energy leads to a sharp rise in photoionization cross section. As there are infinite Rydberg series of resonances, the cumulative effect on mean opacities can be quite significant. But the consideration of these resonances increases atomic computations by more than an order of magnitude from those in the past. A particular type of large resonances, called the photoexcitation-of-core (PEC) resonances, introduce enhanced photoabsorption, contributing to overall opacity. The PEC resonances have been named Seaton resonances (Pradhan and Nahar, Atomic Astrophysics and Spectroscopy, Cambridge University Press 2011). Preliminary results using new calculated photoionization cross sections of Fe XVII (Nahar et al, Phys Rev A 83, 053417, 2011) found that opacity under BCZ conditions increased by ~20%, which supports the latest 3-D model for abundances. While this is encouraging, final results must await full calculations in progress for all relevant iron ions.